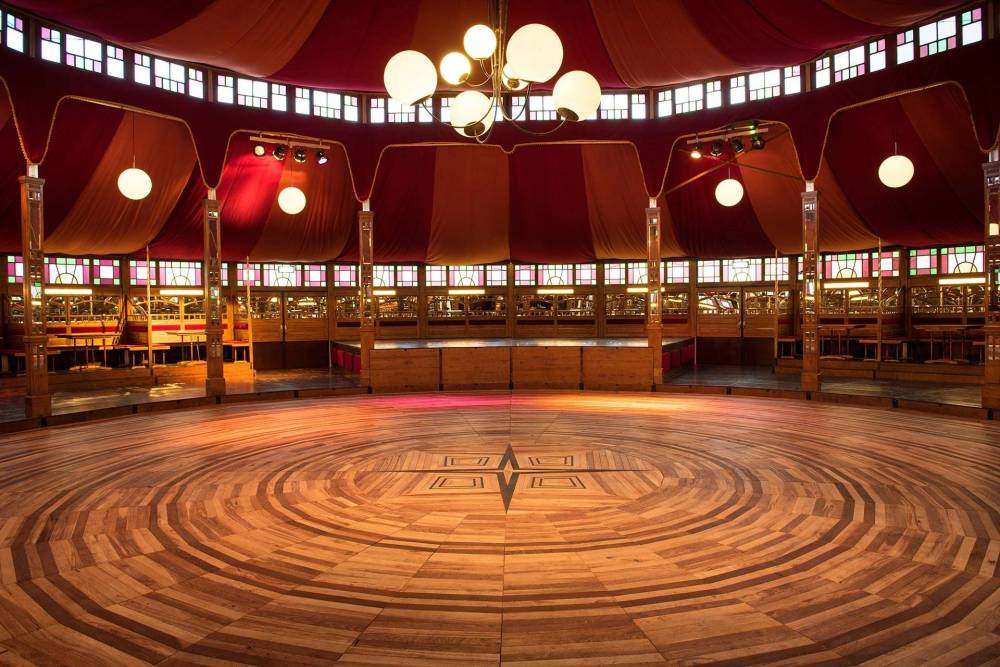 There is something special about a travelling venue. In a matter of hours these venues turn a normal, perhaps bland and unassuming space into something truly spectacular and mysterious.

This sensation can be made even the more powerful by the arrival of a historical venue, one that has travelled the world for decades and that brings along with it the history of past performers and audience members that have entered their doorways over generations.

This unique sensation is exactly what we find in the magic of Spiegeltents.

Spiegeltents are not just any old circus tent. Spiegeltents (meaning ‘mirror tent’) originated in the Flemish region of Belgium around the turn of the 20th century and toured from town to town, originally used for carousels and eventually developing into mobile dance and performance halls.

They’re fascinating structures; hand hewn and built of wood, mirrors, canvas, leaded glass, velvet and brocade. Each Spiegeltent will have over 4000 parts, but not a single screw or nail is used in their creation. The pieces fit perfectly, making them ideal for travelling and assembling along the way.

Surrounded by booths and mirrors and overlaid with billowing canvas they are bred for the mysterious and curious. As the Irish Times once stated, “Their circular shape and discreet booths created a sense of intimacy that lent the tents a reputation for debauchery that persists to this day.” These tents were not simply for the performing elite but for everyone; the downtrodden and misplaced. Brett Haylock, producer La Clique once remarked, “These tents existed for the working class, and they were places with a slightly edgy and seedy reputation.” They have a history of providing entertainment to the everyman and woman, which makes their history all the more unique and engaging for contemporary audiences.

There are unfortunately very few original Spiegeltents that remain, approximately 7. These magical tents fell out of favour with the development of the modern cinema and almost became a figment of our historical imagination. Fortunately, in the late 1980s Australian producer David Bates bought ‘the Famous Spiegeltent’ (the same tent that Marlene Dietrich performed ‘Falling in Love Again’ in the 1930s) and premiered it at the Edinburgh Fringe Festival. This tent and its varied history unsurprisingly captured the imagination of not only the audiences and performers, but the production teams and producers. At this time the Spiegeltent’s began their long-awaited comeback as spectacular performance centres.

The Spiegeltent that has arrived on the quay in Wexford since 2012 is known as the Paradiso. It is one of the originals and still travels the world as they were intended. On occasion, while setting up on the quay we will find items remaining in the tent from its travels. Set lists, confetti and more from across the globe. All these things are only slightly more tangible than the echoes of past performances and audience members from generations gone.

But this year, to celebrate 10 years of Wexford Spiegeltent Festival, the largest Spiegeltent still in operation will be arriving on Wexford’s beautiful quay front; the Fortuna Spiegeltent. The larger tent will allow for a 15% increase in capacity and we cannot wait for you to enjoy its most unique splendour.

The 2022 Festival will run from the 22nd of October to the 6th of November.