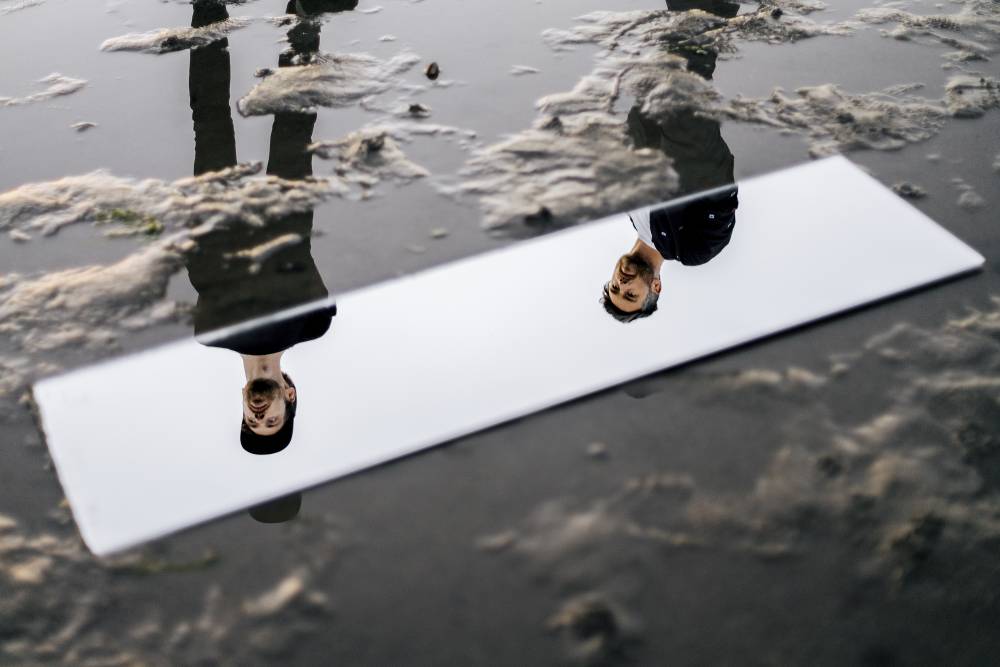 All Tvvins duo Conor Adams and Lar Kaye enjoyed a phenomenal start to their career. Their debut album ‘IIVV’ shot into the Irish charts at #2, earned a Choice Music Prize nomination for Irish Album of the Year and smashed the 15 million streams landmark. Meanwhile, gigs in the UK and Ireland included a life-affirming sold-out show at Dublin’s historic Olympia Theatre as well as a tour as guests to Metric.

Eager to build on that momentum, they dropped three new tracks in quick succession in the shape of ‘Alone Together’ (featuring James Vincent McMorrow), ‘Anything’ and ‘Crash’. From the outside, it appeared as if their second album would rapidly emerge.

By the winter of 2017, however, their ideas simply weren’t flowing and their confidence was low. As Kaye recalls, “We were questioning the whole thing. Is it worth exploring more? Or do we not do it anymore?”

All Tvvins were formed after Kaye sent Adams an excitable message suggesting that they should collaborate on something “real fresh and real new.” And it was another surprise message that put them back on track, this time from their previous collaborator McMorrow: “Let’s try to beat that last track we did together.”

Over the course of a two-day schedule, the trio created ‘Hell of a Party’, the ominous but seductive first single from their forthcoming second album ‘Just To Exist’. As Christmas approached, McMorrow had a second intriguing proposition. “I’m free in January and February. Do you want to come into the studio to make a record?”

“That felt really exciting to us,” remembers Kaye. ”It seemed ridiculous but we knew he could make it happen.” They spent a week compiling a mammoth file of all of the uncompleted material they’d been working on over the past two years, and McMorrow soon responded with his choice of the best ideas to start building from.

January came around and everything else was put on ice to focus their energy on the project. Their home for the next two months would actually be a large open studio space in Dublin – surely the ideal venue for them to revitalise their mojo in.

Not that things immediately reverted to normal, but McMorrow’s small suggestions ultimately made a world of difference. He encouraged Kaye to adopt a back-to-basics approach, which helped to give the music a freshly streamlined impetus without losing his innovative signature style. Meanwhile Adams did everything he could to keep his voice on peak form, which resulted in vocals that are far more versatile and nuanced than before, especially with his newly deployed falsetto.

An early challenge emerged with a vocal loop that was too manic and aggressive to use, but too intriguing to ignore. After drastically dropping its BPM and lowering its pitch, it resulted in the opening groove for ‘Build A Bridge’. The rest of the song – buoyantly optimistic and exuding summer vibes – was finished that same night.

“It was a high point of the album,” grins Adams. “We realised, cool, we can smile again!” Lyrically it reflected the duo’s changing attitude too, as Adams continues, “I wanted to convey the feeling of a summer evening sunset when you’re driving out in the mountains and anything feels possible.”

Suddenly All Tvvins were fighting back and firing on all cylinders. They’d rediscovered the pure joy of making music and would soon be rewarded with the best songs of their career to date. As producer, co-writer and effective third member, it’s no understatement to say this process wouldn’t have happened without him. His vision was apparent from the start, but All Tvvins were astounded by his work ethic. Each week consisted of six days of ten hour sessions, after which McMorrow would fine-tune the day’s progress before the band returned the following day.

The ideas kept flowing. There’s ‘Infinite Swim’, with its muscular funk and outrageous solo, which touches on Prince, Talking Heads and TV On The Radio while remaining recognisably All Tvvins; female vocal harmonies from Sorcha Richardson on the moody, slow-burning ‘No One Is Any Fun’; glitchy electronica on ‘Better Than Here’; and ‘In The Dark’, which possesses a driving energy reminiscent of Springsteen-meets-Future Islands. The   strength   of   the   songs is   immediately   apparent,   largely   the   result   of   All   Tvvins’   renewed   instinct   and McMorrow’s impeccable taste.

McMorrow’s dedication set a blueprint for the band’s future. “We work really hard in the studio, but to see someone a level beyond that was so inspiring. We realised that we really need to up our game.” That philosophy saw them go straight into a European tour once the album’s recording was completed. It’s a lesson that keeps on giving several months later. Echoing that dedication, Adams has spent his downtime learning the piano to continue to push his boundaries towards his full potential.

The end result is ‘Just To Exist’, which Adams describes as “a snapshot of where we were, what we were going through and where we hope to go next.” The title, adds Kaye, represents “an acceptance of what we had to go through” to make All Tvvins 2.0 not only exist, but to once again thrive. Adversity, it seems, is a potent inspiration.

All Tvvins have overcome an obstacle course of a year, but there’s no time to rest as new horizons are waiting to be conquered.