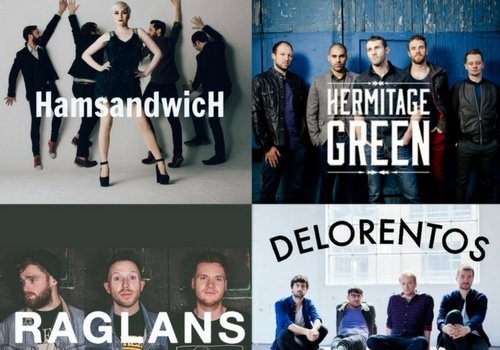 The Wexford Spiegeltent Festival presents a night of Irish indie rock with not one but four of the most talented bands on the Irish music scene.
Hermitage Green, Delorentos, Ham Sandwich and Raglans will take the Spiegeltent by storm on Saturday 14th of October. Each band will perform their own set including their best loved songs such  as ‘Lady Roll Back the Years’- Raglans, ‘Illuminate’- Ham Sandwich, ‘Show me Love’ -Delorentos and ‘Quicksand’ – Hermitage Green.

Hermitage Green
Hermitage Green came together as a band in 2010 as a result of a spontaneous jam session between friends and have grown from strength to strength since then.
Signing to Sony Music Ireland and playing sold out shows around the country and the UK, their unique arrangement of instruments that includes the bodhrán, djembe, rhythmic guitar and banjo sets them apart as a truly original offering of Irish Music. They have already played alongside the likes of Gavin James, Josh Ritter, Walking On Cars and The Pogues.

Delorentos
The Dublin based alt-rock band made of Ró (vocals, guitar, piano), Kieran (vocals, guitar), Níal (bass, keys, backing vocals) and Ross (drums, backing vocals) have been making music together since 2005, and for fans of native Irish music, The Delorentos are a staple of the live scene. The band write emotionally urgent songs for your heart, head and feet. Delorentos have opened a number of high-profile shows throughout their career including Bruce Springsteen, Artic Monkeys, Supergrass and Bell X1. Their album Little Sparks scooped the Choice Music Prize in 2013.

Ham Sandwich
One of the most enthralling live acts in recent times, HamsandwicH are well known for their incendiary live performances which has put them right at the top of the live acts to see today. With the combination of Niamh Farrell’s powerful yet sweet vocal and Podge McNamee’s juxtaposing baritone the band are given it’s signature calling card. If ever there was a band to feed off their audience it is HamsandwicH. Each show is bona fide celebration with everything from balloons and confetti to their unique crowd interaction on display.

Raglans
Raglans are an Irish indie rock band based in Dublin, Ireland. Officially formed in 2011, they consist of Stephen Kelly, Conn O’Ruanaidh and Rhos Horan. Their self-titled debut album was released in March 2014 through IRL Records, and reached no.5 in the Irish Album Chart and no.1 in the Irish Indie Chart.
They have toured extensively worldwide, as well as providing support to bands such as The Strypes, Twin Atlantic, Haim, The Courteeners, The Fray, The Libertines and Lifehouse