Wexford Artists In The Round 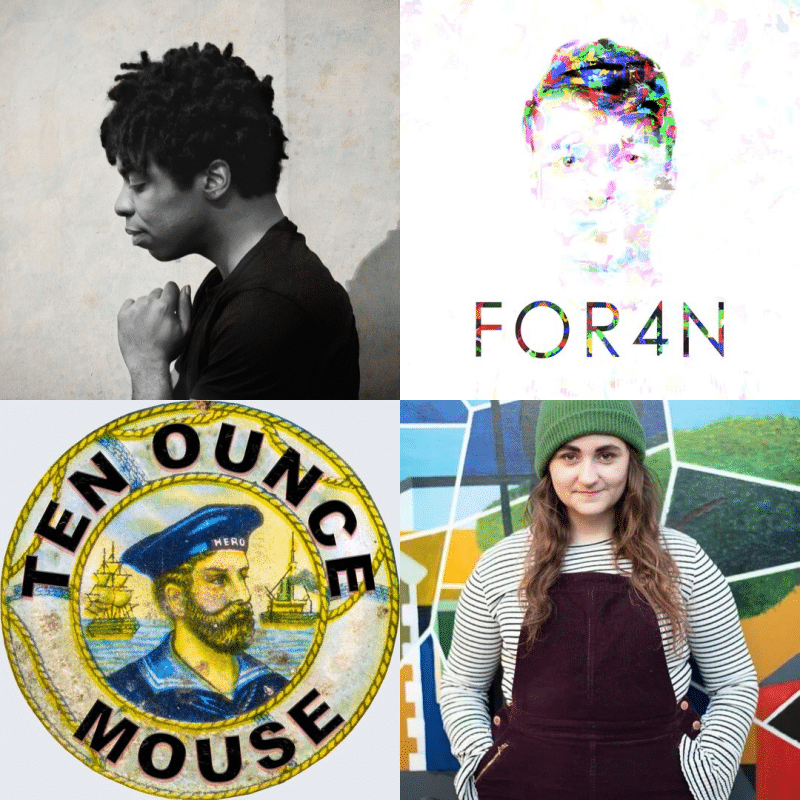 The Wexford Spiegeltent Festival is delighted to host a night of Wexford’s best up-and-coming local talent. With music ranging from electronic and rock to soul and blues, this show promises to be a spectacular illustration of Wexford’s musicians, singers and songwriters.

Conor Foran is a 24 year old Musician/Producer from Wexford Ireland. After years of experience in various bands and multiple stages shared with many established artists such as The Academic, Chasing Abbey and John Gibbons, Conor began pursuing his own unique sound in the summer of 2018 – a fusion of electronic, hip-hop and pop. He made his debut appearance that summer at Electric Picnic and returned once again in 2019 at the ‘Art Lot’ stage. His latest single ‘Different’ has been widely regarded and picked up Beat 102103’s ‘Irish Artist of the Week’ upon release.

Now with a live band, FOR4N is bring his smashing set to the Spiegeltent for the first of many live shows around Wexford.

TEN OUNCE MOUSE are an up and coming Indie/Power Pop 4-piece that shows a lot of promise. With catchy songs, driving rhythms and fantastic melodies drawing inspiration from Joy Division, The Pixies, The Smiths and Car Seat Headrest amongst everything else, they’re one band you don’t want to miss.

After rave reviews from their last stint of shows around the country, they released their live album “Live At Holohans” in November 2018.

Constantly gigging nationally and currently working on their debut album, they are quickly making a name for themselves in the Irish independent music scene.

Rachel Grace is an up and coming Wexford-born singer-songwriter.

She is a proudly homegrown independent artist that has been described by her followers as a unique young lady with a powerful observation on life and the voice of an angel.

No stranger to the stage, she has supported internationally renowned artists such as Wallis Bird, Don Mescall, Keith Plunkett, Larry Kirwin, Brian Deady and Paddy Casey. She released her EP ‘Routes’ in May of 2018 and it has been played on radio stations across the country, earning her the spot of Artist Of The Week on Beat Fm. She was a festival favourite at Free Fringe Fest 2018 and performed on Natashas Living Food Emporium Stage at Electric Picnic 2018. Her most recent performances include supporting Brian Deady in Mike the Pies and Live at St Lukes and performing on the Glass House Stage in Vantastival
2019.

Since 2013 David Clark has been a fixture of the Wexford music scene. He has spent the past few years gigging relentlessly in the south east and abroad but never strayed too far from his first musical love, the craft of songwriting.

After having played in various bands and tours through the years, Dave has shared the stage with notable acts such as Paddy Casey and Wallis Bird in festivals and venues and events such as Electric Picnic, the Ruby sessions and the Opera house.

Recently Dave has taken to honing what he has learned over the years into a sound that is unique, haunting and new. These eclectic songs, two years in the making are simultaneously organic and electric and draw influences from artists like Elliot Smith and Nina Simone as well as heavier bands such as Nine Inch Nails.
His first single is set to be released in early 2020.

The show is on Wednesday 9th. Doors and full bar open at 6.30pm!